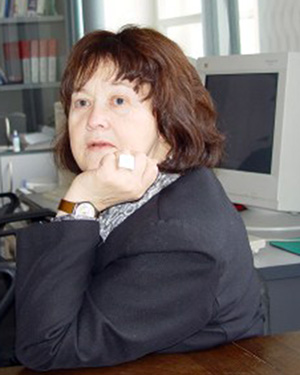 Member of the Organizing Committee

Secretary of the Virtual Computer Museum.

Natalya Cheremnykh is an active propagandist of national computing and computer development history. She graduated from the Novosibirsk state University in 1969. Her basic speciality is “Mathematical Linguistics”.

In 1969-1972 she was working as an engineer (later – senior engineer) at the Design Bureau of System Programming in Novosibirsk. In1972-1990 she was working at the Novosibirsk affiliate of the Institute of Precession Mechanics and Computer Engineering (Moscow). In 1990-2011 she headed the department of scientific and technical information at the A.P. Ershov Institute of Informatics Systems (Novosibirsk).

N.A. Cheremnykh is a translator and compiling editor of scientific and technical bulletins “Novelties in Time-sharing”, “Novelties in System Programming” and some other.

She also worked at the academician Ershov Library as translator of foreign authors' works into Russian from English and French and also edited and translated into English the works of her colleagues from Computer Centre and Institute of Information Systems (Russian Academy of Sciences).

She published her own translation of the book “The Mythical Man-Month”, by Frederick P. Brooks, Jr. University of North Carolina at Chapel Hill, at the leading publishing house “NAUKA” (science) 1977 (edited by A.P. Ershov). Translated into Russian (I.V. Shitova at alias) the monograph by V. Turski “Methodology of Programming” 1980, Russian edition by publishing house MIR (foreign literature).