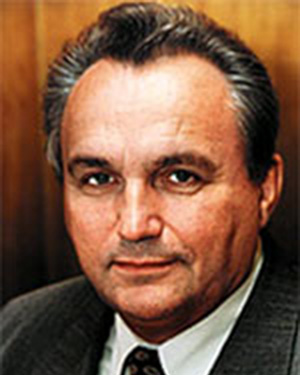 Member of the Program Committee

V.I. Steinberg is the chief designer of the federal state unitary enterprise “Argon” (scientific research institute). He is a senior scientific collaborator; holds a Candidate of Technical Sciences degree. From 1964 he is engaged in development of on-board and other special computers; he is the author of the first computers with monolithic integrated circuits and multichip arrays.

His mobile computed complex “Beta-3M” – the USSR first one to work while it is transported – was adopted by the Soviet Army and by the armies of the Warsaw Treaty countries. His on-board computers “Argon” are used in land-based, naval, aviation, space and other objects.

An on-board computer of his “Argon” series was mounted on the Soviet orbital space station MIR, where it was the main control device.

In 1958 V.I. Steinberg finished school in town of Lipetsk (west of Russia), then moved to Moscow where he worked as a turner at the experimental plant of an aircraft design bureau (A.N. Tupolev research and development centre). In 1959 he entered (completely new) faculty “Electronics, System Science and Computer Engineering” of the Moscow Institute of Forest Technologies (now – Moscow State Forest University). S.P. Korolev – the chief designer of the Soviet space technologies, personally established this faculty in the same 1959.

Steinberg graduated with qualification “Mathematical and Computing Devices” and received a position at the scientific research institute for electronic mathematical machinery, subjected to the USSR Ministry of Radioindustry. That was one of the first, and basic, institutes for computer engineering and computations. He successfully completed postgraduate studies there, received scientific degree and began his research work on a new subject “On-board Computers”, having eventually become one the country's leading experts in it.

An „on-board computer“ is a computer mounted on a mobile/moving object (vessel, airplane, tank, spaceship, etc.) and operating during its motion.

In 1968 the institute was integrated into the Scientific Research Centre on Electronic and Computer Technologies (SRCECT), which later became the head organization of the scientific and production enterprise “Persey/Perseus” (SPE “Persey”) structure.

V.I. Steinberg worked there as a vice chief of department, then vice chief of Complex Department of On-board Computers, vice chief-engineer on special computers of SRCETC (and SPE “Persey”) and, finally, as vice chief designer of digital on-board computer complex “Argon”.

In 1996, with the crisis in Russian science and education, Steinberg initiated, and launched, an educational program (at his institute) to “save the young scientific generation”.

He himself authored more than 70 scientific works, inventions, scientific and methodical essays and course materials.

V.I. Steinnberg is decorated with orders “The Sign of Honour“ and “The Red Banner of Labour”, with four medals and the honourable Diploma of the Government of Russian Federation. He also has the special medal “Honourable Radio master” and bears the title “Distinguished Machine builder of the Russian Federation”.